SMRFC was formed in 1934, at the time the newly formed team did not have a kit, club house or a nickname. Most of the members used to drink in a local pub in the town centre called the Unicorn Inn, now known as the Old Coaching Inn. The members asked if the pub could be used as the clubs HQ!

One of the members of SMRFC had a faint contact with a New Zealand Touring team who were in the UK at the time, he contacted them to ask if South Molton could be called the "All Blacks", South Molton received a letter back confirming that this would be OK and the New Zealand team donated a set of playing shirts, hence why SMRFC play in Black and are known as the "All Blacks"

So with a HQ and a kit the club now needed a crest to go onto their new playing shirts, so as a thank you to the landlord of the pub the Unicorn logo was used.

The members used to play their matches at Ffuzbray (George Nympton) and used to change at the Unicorn Inn.

After the war years a local business man and player, Gerald Kingdon bought The Tinto Hotel where the current club house stands today, in 1962 and the members moved their HQ to The Tinto Hotel.

Mr Kingdon donated land and converted the Stables at the back of the Tinto Hotel in to changing facilities which is now Carlo Melchiors Chocolate Factory.

With the new location came a new playing pitch which was named Unicorn Park after the crest on their playing shirts.

As more members joined, SMRFC were able to put out more teams on a regular basis. The highest level the club played at was in the Western Counties in 1997/1998

In 1996 a ladies’ team started. The ladies team were doing so well that they were promoted to the Western Counties within a few seasons, unfortunately this was not a good thing for the club and they were victims of their own success, going up the league in such a short space of time meant players didn't have the time or could not commit to the time needed to travel away, eventually the ladies team folded.

Before our current Colts teams, the last time SMRFC had a younger side was back in 1996. With the younger players missing it meant the club did not have players moving up into the senior section, with this and the older members retiring it resulted in the teams moving down the leagues 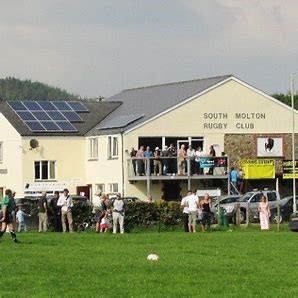